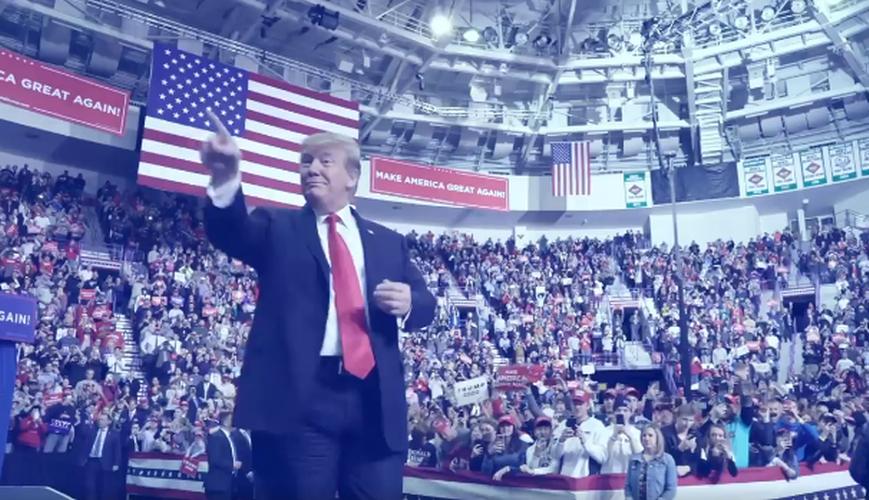 The positive trend in the polls shows that Donald Trump on election day could achieve not only a convincing electoral victory, but also get the most majority of all votes.

For the next ten days, the whole world will follow the elections for the White House, which will take place on November 3, with increased attention. Who will win – Biden or Trump? It is a “million-dollar question” that is being debated on television, analyzes in newspapers write, and it is hotly debated on social networks.

As expected, everyone has an opinion on this and wants to contribute to the “dialogue of humanity” on a matter that seems to leave no one indifferent – who will be the most powerful man in the world?

Hence, it is not surprising that, with such high emotional roles and in an atmosphere of heightened passions, attitudes about it go to irreconcilability. Thus, we see how two camps were formed, where each camp has its own, completely separate, parallel images of reality. It is a situation reminiscent of that experiment in which the number 6 is drawn on the floor of the room, which the one on the other side of the room sees as 9. If there was real dialogue, they would soon realize that both are right from their angle.

The irony is that social networks, instead of being a global arena in the exchange of opinions, only reinforce this exclusivity and bury people even more in ideological trenches. They, as a rule, connect us with people of similar beliefs and attitudes, so we get closed virtual communes of like-minded people who encourage each other in exclusivity and stupidity, and not a dialogical situation that would encourage us to learn from like-minded people. Nothing could ever be learned from like-minded people anyway, because we know that every coin has its own face and reverse.

The matter is not made easier by the traditional media either, which in this situation have mostly decided to agitate in favor of the left-wing candidates. That is why complaints about “fake news” are constantly coming from the opposite camp. But, this situation is also a kind of blessing for the right because that is how they get a broader picture of reality.

Namely, the right sees what they see, but they also see what the left sees, because that image is transmitted to them by the media. The left, on the other hand, is deprived of this broader perspective precisely because the media confirms their picture of reality and thus keeps them locked in an ideological “bubble”. It is this broader perspective that is the reason why the right option is potentially victorious, because an idea that closes itself in a pen and separates itself from reality cannot win.

That’s why we’ve had situations, like Trump’s first victory or Brexit, where the left is surprised to see the world crumbling before their eyes, and then they come up with the full force of excuses to explain their despair and short-sightedness. If it were enough to agree to the ruling dogma for the success of an idea, chameleons and parrots would be the smartest animals.

There is a whole continent of reality that the left does not see at all. In order not to get into a situation of global astonishment and massive nervous breakdown on the left again, let’s look for a moment at how things around the American elections look from that wider angle, which is completely invisible to many today.

So here I will try to at least exhaustively state a part of that reality which speaks in favor of how Trump is on the way to achieve a victory over Biden with a bigger difference than against Hillary Clinton, which the media does not normally convey to us. The extent to which the Democrats fully rely on the power of the media is evident from the fact that Biden almost does not hold rallies and does not have a field campaign. So, every now and then we have a situation where his campaign announces a “break”, while Biden sends messages to supporters mostly from the basement of his house.

It looks as they had thrown all the cards on the Crown epidemic, hoping that the country would be quarantined, so they did not even form field work teams, but their plan failed, so they were left without a door-to-door campaign. On the other hand, we see huge enthusiasm at large rallies organized by Trump across the country, usually several of them in one day.

Interestingly, a quarter of the people at these rallies were not registered Republicans, while the same number did not vote in the 2016 election at all. Trump’s campaign managed to mobilize a record 2.5 million volunteers, who by mid-October alone had already knocked on 100 million doors, from of which 12 million in countries that are key to winning the electoral majority.

These are two completely different approaches to the campaign, one that relies on the media and the other on fieldwork. In the last elections there were a lot of undecided voters, while in this election their number is almost negligible, about 1.5%. So, most voters have already decided who they will vote for, so persuasion will not have much effect. These will be elections in which motivation and drawing one’s own to the polls will decide, and not the content, so it is clear which of these two approaches is more adapted to reality.

Many rely on surveys in their analyzes, but we know that surveys can be misleading and give the wrong picture if we look only at the numbers. First of all, the question is how many of the respondents will actually go to the polls? There is also the problem of so-called hidden Trump voters, who are assumed to be 5-10%, who out of fear do not want to say who they will vote for or deliberately deceive the pollsters, but will go to the polls.

Therefore, the numbers in the surveys should not be given as much importance, but trends should be looked at. And what the trends show us is very similar to the replay of the situation we had in 2016. So, in a poll conducted by Investor’s Business Daily, which was one of two polls that accurately predicted the results of the last election, we see that two weeks before the election there was almost settlement between Trump and Biden.

Namely, while only a week ago the survey showed Biden’s advantage of 8.6%, now that advantage is only 2.3%, which is within the statistical error. A similar trend of melting differences is shown by other surveys. The situation is now even more favorable for Trump, as he entered the positive trend a week earlier than in the last election. This tells us that on election day, Trump could not only achieve a convincing electoral victory, but also get a majority most of all votes.

Winning the votes of the majority most of voters is important to Trump in order to thwart plans to challenge the election results, for which the play has already been prepared. That is why we now see how he invites his voters to go out in the so-called “Blue” states, such as California, where they usually abstain. At the same time, some other indicators should not be neglected, which again support Trump.

Americans traditionally prefer the re-election of the current president, with a much more important view of the bank account than ideology. While Democrats have thrown all the cards at ideology and fear of the coronavirus, Trump still holds the lead in terms of economics. So over half of Americans, 56%, say they live better today, under Trump and the coronavirus, than they did four years ago, when Obama and Biden were at their peak.

Biden’s commitment to raising taxes is not in his favor, because, as a rule, he who promises higher taxes always loses. It should also be borne in mind how corona crisis makes people conservative and skeptical of major interventions in the economy. Thus, Biden’s statement that the oil industry “must be replaced” by a green industry did not resonate well among “rusted belt” voters, especially in Pennsylvania, where a “dead race” is taking place, and without conquering that country, Biden’s chances of victory are close to zero.

In addition to getting your voters to the polls, it is important to demotivate the voters of the other side. So Trump has made a big shift among minority voters, who overwhelmingly vote for Democrats. Statistics with the so-called early voting in Michigan and Pennsylvania speaks to the low turnout of African Americans, as well as the rise of black male votes for Trump. With the already recorded collapse of Latino votes for Biden, this also makes his chances of winning very pale.

Many think the lack of strong Obama support played a crucial role here. He recently appeared in Philladelphia, but then went to a rally in Florida, which has already been lost to Biden, leading to the conclusion that Obama is not campaigning for Biden, whom he has probably already written off, but is supporting Senate and Congress candidates. , thus, preparing the ground for the 2024 elections and the almost certain presidential candidacy of his wife Michelle.
It should be mentioned that the sky also is interfered in the elections, so Trump is certainly in favor of the election of a new judge of the Supreme Court on the eve of the elections. It is speculated that her choice could add some percentage of support for Trump by women from the suburbs, among whom Trump does not stand the best.

Finally, Biden’s prospects in this election could be complicated by increasingly scandalous evidence of his family’s corruption, which has come to light in recent days, despite desperate attempts by the media and social media to censor the news.

These are some of the main reasons why I think we will see not only a repeat of the 2016 elections, but also Trump’s overwhelming victory in this election as well. If anyone has missed any of these reasons so far, they should therefore prepare for another four long years of Trump’s second term.

This website uses cookies to improve your experience while you navigate through the website. Out of these, the cookies that are categorized as necessary are stored on your browser as they are essential for the working of basic functionalities of the website. We also use third-party cookies that help us analyze and understand how you use this website. These cookies will be stored in your browser only with your consent. You also have the option to opt-out of these cookies. But opting out of some of these cookies may affect your browsing experience.
Necessary Always Enabled

Any cookies that may not be particularly necessary for the website to function and is used specifically to collect user personal data via analytics, ads, other embedded contents are termed as non-necessary cookies. It is mandatory to procure user consent prior to running these cookies on your website.